Wow…  Lots of cycling this past week.  Hope you all had a terrific 4th of July week and got out there like I know several of us did.   First, Timber, Bryn and I got out the morning of the 4th.  It was a little warm, but a great ride.  We found a new trail that runs from Swope Park north all the way up to the plaza.  The concrete on the new trail is really nice.   I actually road it again this past weekend.  There’s a lot of twigs and leaves on the trail, as it’s not heavily used yet, but I’m hoping that as it’s popularity grows this changes.  Amazingly, the part of the trail that was the least maintained was the area near the Plaza.   Here’s the route that we took if your interested. 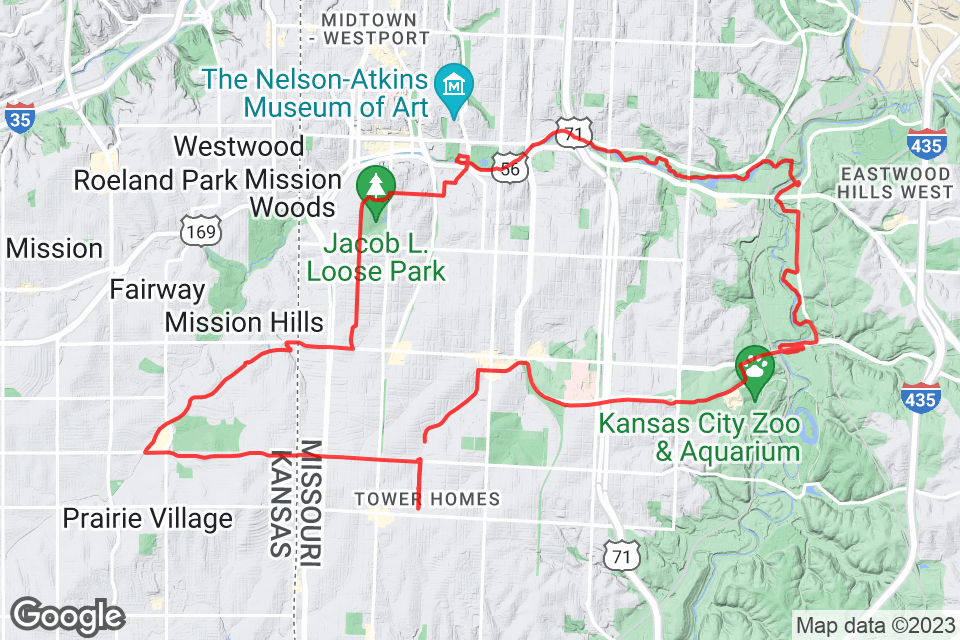 Thursday night, there was the Velo Garage and Tap House Thursday Night Ride and James and I joined up and road cliff drive with the group.  Then, several of us were out and about this weekend Training for Ragbrai.   Saturday I got a solo 60 miles in with 3100 ft of climb.  James got 68 miles in, and Tara and Robert also got around 50 miles in.  Good work everybody!  James also was still able to get up on Sunday to ride in Velo’s 2nd Sunday morning ride.  They got 28 miles in at a pretty good 13.6 mph clip.  Not too Shabby.

More importantly, a game of Photo Tag has begun!  It all started when James posted this pic of his bike to a group SMS text chain.  Proclaiming the greatness of his all terrain tires.

Of coarse, I couldn’t let this stand, so I found out where he took that photo and posted one of my own.  I then texted my bike in a different location, proclaiming “Tag… You’re it!”  Thus the game begun, and we’ve already had few players join.  You can find out more about the Photo Tag game Here!

Right now there’s a bridge in Kansas somewhere that needs to be identified.  Can you find it?

The Jerseys have arrived!  I’ve been able to get them to some but not all.  They look pretty damn good to.  They’re getting good responses from other cyclist who have seen them.  I wore mine Thursday night, Tara and Robert wore theirs on Saturday, and James wore his on Sunday.    If you ordered a Jersey, reach out to me so that we can arrange a way to get it to you.  I’m planning on having them available Saturday at our monthly ride.   Speaking of which….

Saturday is our Monthly BBB Ride!  As mentioned before, this will be a good training ride for RAGBRAI, but also give an opportunity for those not riding RABBRAI to meet up and get some good miles in.  As usual we’ll be meeting up at McLain’s Bakery in Brookside at around 8:30 am, and heading out around 9:00 am.  We’ll make 2 loops.  The first a 20-25 mile loop.  Then we’ll stop at Bier Station as usual,  and then we’ll head out for another 20-30 mile loop.  Join where/when you can.

This and other rides can be found here