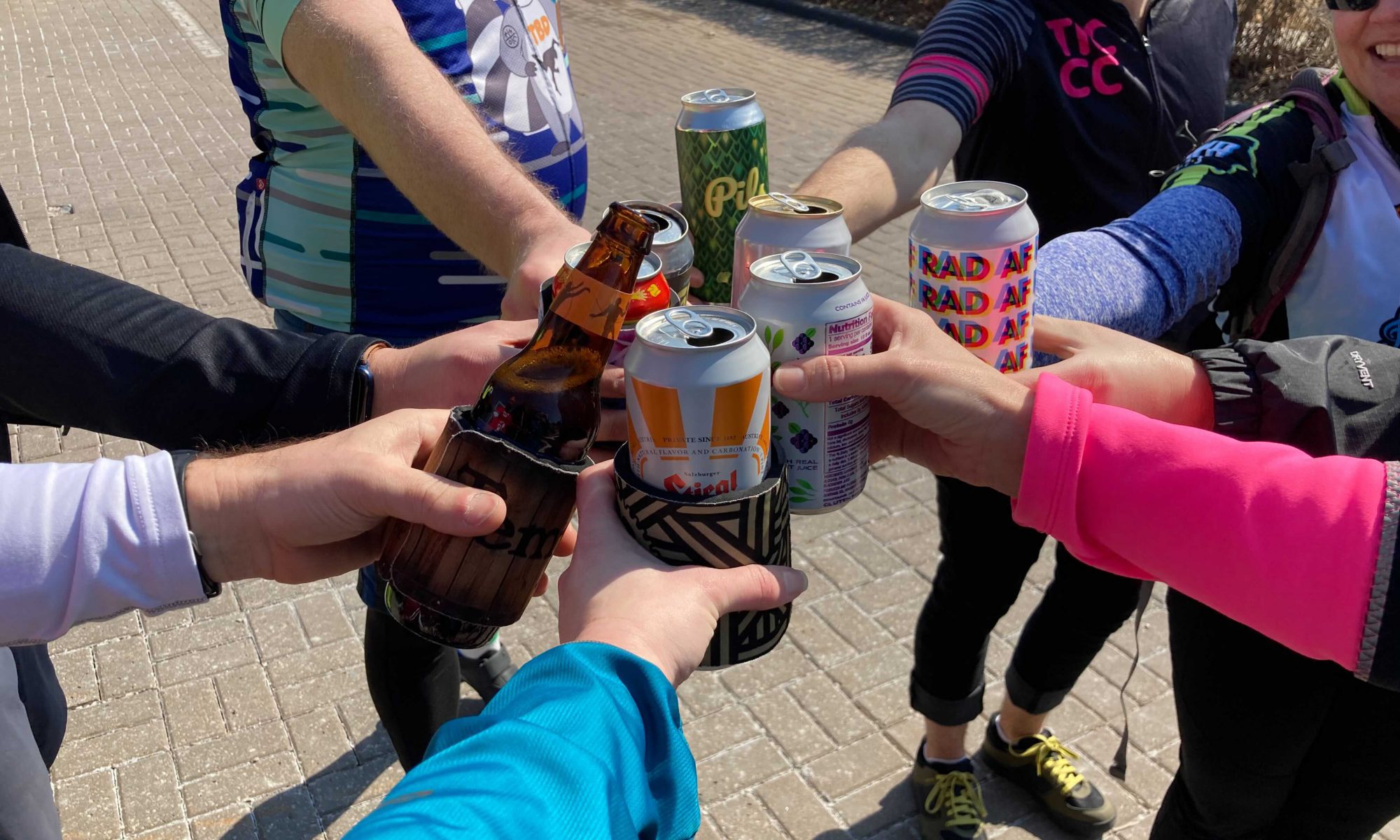 Finally starting to see the light at the end of the tunnel!  Weather is warming, the covid vacination program is building up steam, and things are starting to align for what could hopefully  be a great rebound Cycling Season!

Spring Training Baseball games have begun, and that’s always been my queue to also start getting back into the swing of riding regularly, in hopes of being in good enough shape for all the great rides of the summer.  I’ve got a lot more training to do this year to get back in shape after last years lack of rides.   This past weekend was a good kickoff!

Several members of Team Bad Decisions met up Saturday for the first Breakfast Bike Beer Ride of the year.   Joining me, we had Nancy, Brad, Anne, Spenser, Tara, Cait, Derek N., Andy, Megan, and Jeff B.  We met up at McLain’s in Brookside, a regular starting place for BBBRs, as not only do they have fantastic breakfasts and pastries, but they’ve also got a nice outdoor seating area that they’ve extended into the street with concrete baracades.  It was still a bit chilly, though, as the area was in the shade and had metal chairs, but the food was great, and it was fun sitting around for a bit and laughing as everyone gathered.

When it was time to roll out, the inevitable debate about how many layers to ride with began for most.   There was still a bit of chill in the air, but the sun was shining, and we knew it was supposed to warm up quick.  People made their choices, and it was go time!

We hooked over to Oak and headed south towards 85th Street.   There we did a little jaunt onto the Trolley trail, and took that east past Troost, back behind BB’s lawn side BBQ, and back along the creek.   Generally, the trails in good shape right now.   Still have to watch out for the possible pot hole, bit of glass, or muddy area, but in general I’ve seen it MUCH worse.  When we reached the end of the trail, we turned south, over the Blue River, and made our way towards the Indian Creek Trail.  Once we got over the Indian Creek Bridge, decisions about gear started being made, as many of us were heating up.   Types of gloves changed, jackets layers started coming off, and plans for more changes were made.

We took off again on the Indian Creek Trail heading West.  Again… Indian Creek trail is in really nice shape right now.   Get out and enjoy it!  it’s one of my favorites.  When we got back behind Thai House and Lamar’s Donuts (why didn’t we stop?) by 95th and Holmes, we stopped again as Megan and Jeff broke off.   They had plans to help get one of their neighbors to a vaccine appointment and needed to head back home.  Here, for many of us, MORE layers came off.   The sun was out and it was turning into a beautiful day.  Cait… on the other hand…  pretty much remained in full gear.

We started heading west again on the Trail.   We had one little hick-up along the trail, after Wornall, where the trail makes a hard right and immediately there’s a really steep incline.  It’s not long, but you’ve got to be ready for it.   Those of us that knew, per-geared down and were ready, but we were also in the lead, and that slowed the group down, and those that weren’t aware got caught by the traffic jam and the hill and were unable to gear down in time.   Some had to hop of their bikes and walk it up.  Bet they’ll be ready for it next time!

We continued on, riding along the path and into Leawood park.   Busy day at the dog park!  Tons of people walking their dogs along the trail leading up to the park, which slowed us down some, but it was great to see everyone out enjoying the day.  We eventually stopped at one of the gazebos in leawood park to take a quick break and enjoy the sun some.  We also needed to slow ourselves down a bit, as we’d been keeping a pretty good pace!  We knew our planned beer stop didn’t open until noon.   I had figured a 15+ mile route, being the first ride of the year, would take us about an hour and a half.  I was wrong.  We were well ahead of pace.

While we enjoyed the Sun, we learned that Cait apparently has some blood line ties to a group that lived on the equator for millennia or something and now suffers from a disorder where she’s NEVER warm (Conjecture of coarse).  We were all doing great.   Cait didn’t agree and was ready to start biking again to stay warm.

To slow ourselves down, we altered our route some.   Instead of going straight up Lee, as was intended, we meandered our way up part of the North Leawood Loop.   This added a few minutes, and a couple miles onto our ride, and ended up being perfect as we finished our ride right at Noon!   Anne, thankfully, avoided all the steel poles along the Trolley trail this time, as we road North past KC Bier Co on our way to Bier Station.

Bier station has been undergoing some renovations; redoing their floors and their outdoor seating area along with adding wine taps and some other goodies.   This past weekend was their first weekend back open.   Unfortunately, they weren’t fully done yet, and as we rode up, we learned that they were only open for take-out beer.   This was a shame, as I had hoped we could enjoy their nice outdoor patio,  but we rolled with it.   We all grabbed some take out beers and congregated on the sidewalk outside where we stood around, telling stories, and generally enjoying the warm early spring day.  Eventually we called it and ended it there, though I know Nancy and Brad turned around and went down to KC Bier Co for some more fine beverages. 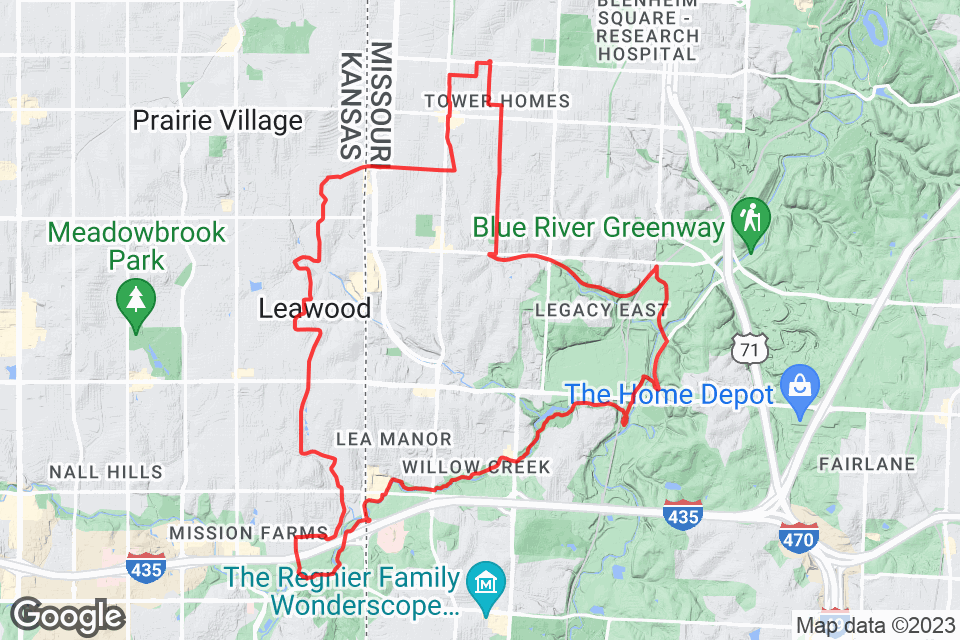 More BBBR’s to come soon as well as other fun rides!   There’s a group of us gathering for Thirsty Thursdays again too..   Generally meeting at Cinder Block at around 5:30 and ending at Pat’s Pub on Swift for Taco’s.   I’m sure as Velo begins to resume regular operations, we’ll start meeting there again, but for now, we’ll take what we can get.  Ride when and with whomever you feel safe to do so.   I look forward to seeing and riding with you all again soon.