The weather for this first weekend in November turned out to be pretty good for biking, and there was a lot of biking related activity to go along with it.

Congratulations to Karin Jones for joining the Single Speed club.  She, Treadwell, Derek R, worked with Zeke at Velo Garage all day Saturday and they built Karin’s new All-City single speed gravel bike.   It’s a good looking bike.  I and several others got a chance to give it a spin Sunday at Velo and it’s a fun little ride.

Sunday turned out to be a terrific day for riding, despite a pesky little wind from the south.  It was the morning of the Pre-Chiefs game ride, but a lot of people got out to do other rides too.

Derek R. got up super early to ride with the Epic Bike Shop Sunday Coffee ride.   They got themselves a little bit of hill climbing in.   Then when that ride was over, Derek made a Stop by Velo to say “Hey” and drink a few beers while watching the Chiefs

Karin, Treadwell, Lynne, and Jeff W.  got out a little bit later in the day and went for a Ride with Addie and thier Daddy ride group.   Their route took them  into North KC as well and they Stopped by Velo during the Chiefs game to say, “hey.”   That’s were several of us got to try out Karin’s new bike.  It’s a fun like bike to scoot around on.

Finally there were those of us, the true warriors, that road the Pre-Chiefs game ride.  It’s easy to remember who was all there, cause it was just Tara and I.   We had a great ride though.   We started off at the Opera House Coffee and Food emporium.   We were supposed to meet at 8:30, but despite the extra hour of sleep from the DST time shift that night, I still woke up late.  I eventually got there around 8:45-50.   Since it was just us, we weren’t pressed for time.   We had coffee and a decent breakfast, watched a lot of Vikings fans roam around the River Market, and eventually decided to make a go at the ride.  We probably got started around 9:30 or so.

For our route, we went with an oldie but goody that I slightly modified.   We headed North across the river towards the Line Creek Trail.   Line Creek still remains one of my favorite rides in KC, and this day was no exception.   When we got into Riverside, we made a slight detour from my normal route to go checkout the interurban trail in Riverside.   This is a great little extension off the Line Creek Trail that allows you to get down closer to the Red X, without having to go through that stop light up by the Quick Trip and Corner Cafe.  Check it out.  We used it on the return trip too.

We set a good pace Northbound on the Trail and pushed hard until we got north of 68th St., then we stopped to grab a little water, a bite of food, and get ride of the full finger gloves as the day was warming up.   After that, the Grinding climb until we were North of Barry Road.   We Looped around the 152 Trail until we finally started heading southbound on Platte Purchase Rd.   It was here that Tara came up along side and commented “Man, that climb on the trail, I was sucking wind and really having trouble catching my breath.”   I asked if we needed to take a break and stop off at the Quick Trip just a bit away.   She said she thought she was doing fine at the moment.   Me, knowing the route I planned replied, “Well… We’re about to test that out!”

We then proceeded to find some serious F-ing hills.   I’d never ridden these hills before, but had a feeling they were bad based on the terrain map I saw while building the route.   I wasn’t expecting them to be that sever though!.   Platte Purchase to 76th St. to North Coventry.   Want to test your hill climbing out?   That’s a good route to take, and apparently, it’s along this segment that I almost died… again.

As we were coming down the final descent of that segment, Tara pulled up along side of me and ask, “Did you see the deer?”  No!.. I hadn’t.   Per Tara,  apparently, it came running out of the wood to our side, jumped, and just barely missed my rear wheel.   2 others followed and cut in between us.  Crazy, keep your eyes open out there.

We then cruised back down the Line Creek Trail, and back to Velo for after ride drinks and to cheer on the Chiefs!   James Currans even made a guest appearance down at Velo.  Generally a great day!. 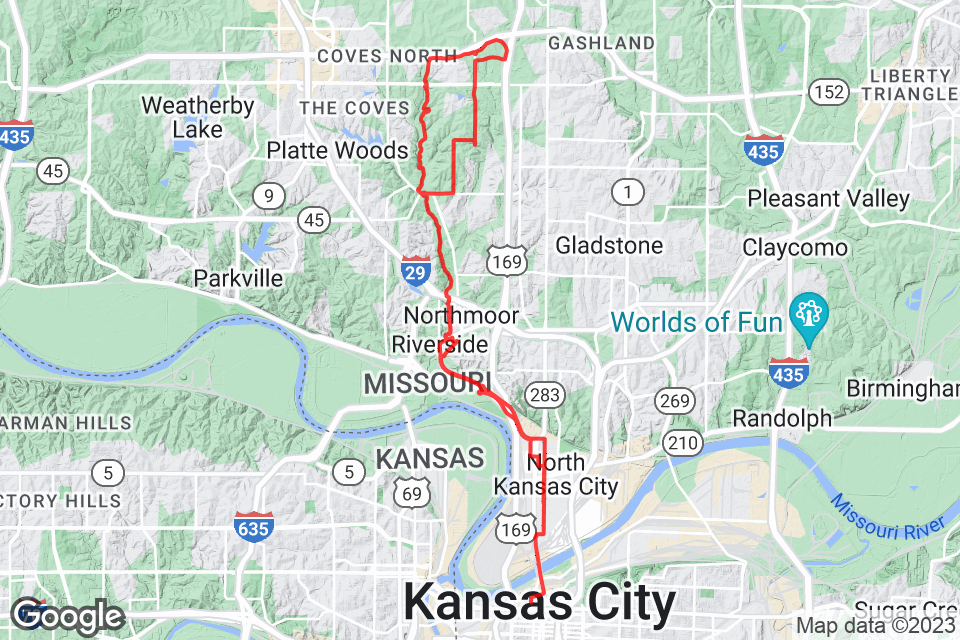 It could be a cold day out there, but we’re going to get out and ride the 50 mile route on this self supported fun ride.   We’re even stashing a cooler along the route, and altering the route some to stop by a bar that’s no too far off the route.   Come Join us!  If you do, be sure to let me know so that the cooler is properly stocked.

Not a lot of details yet about this, as we’re still discussing, but we’re talking about heading out to Lawrence and riding some gravel.   Stay tuned, more details to come.

Grab your Santa suit and let’s go for a ride.  Short fun ride.  Check the link above for details.