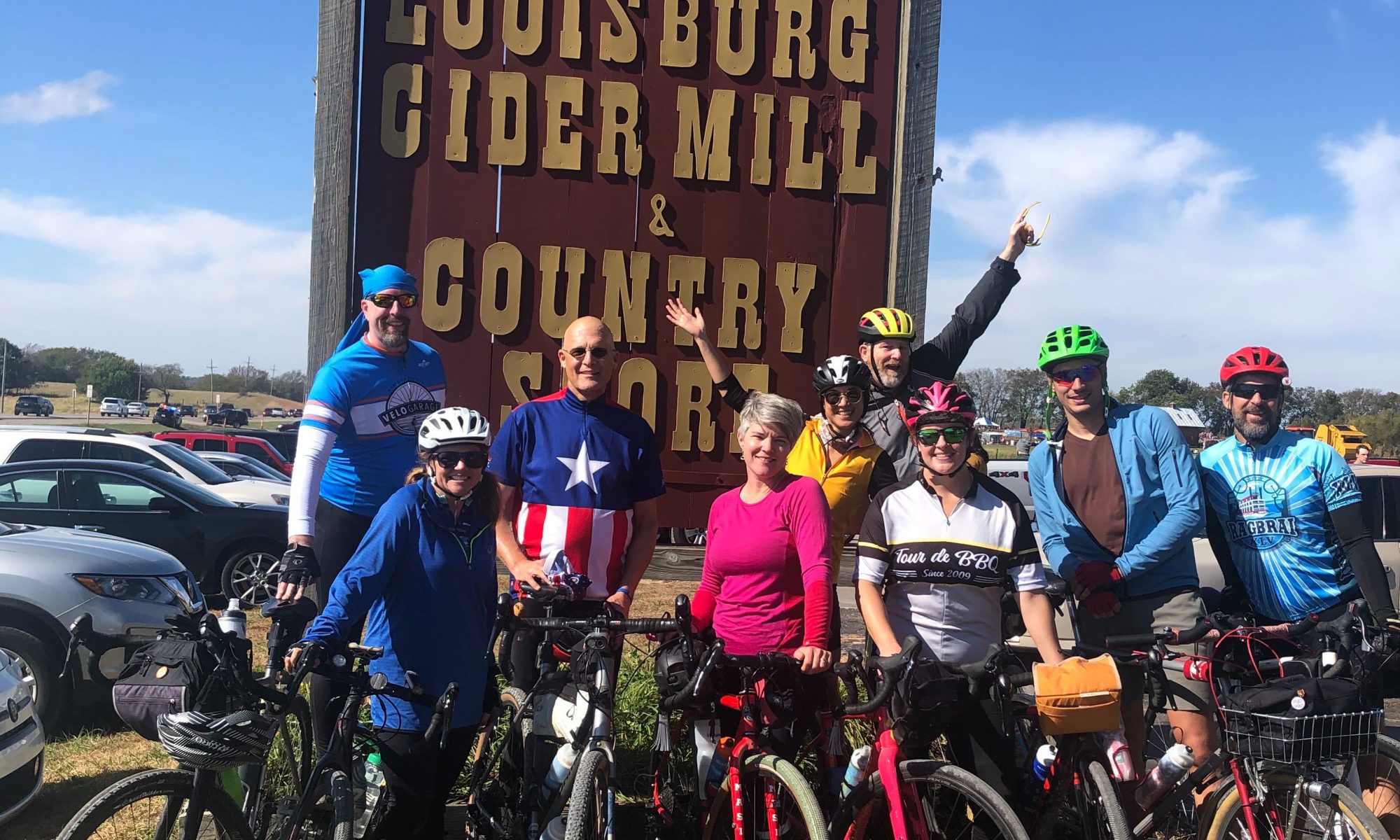 It’s a rarity when in mid October you get the chance to spend your entire weekend cycling and hanging out with friends, but that’s what I and several others got to do.  Let’s recap!

It was a cold, wet, Saturday morning, but that didn’t stop several of the crew from getting their butts up WAY too early to head down to Overland Park and checkout the REI garage sale.   Derek Rowland put his insomnia to good and was in line before I even woke up that day.   I had spent Friday night drinking around a fire pit with some friends, and had no intention being anywhere before 8:00am.  Eventually Tara, Neil, Treadwell, and Karin joined Derek in various states of caffeinated consciousness, and braved the rain to hunt for some good, returned, gear at REI.  Some items found.  Money was spent.  After their hunt, there were trips to Gus’s Famous Fried Chicken, along with Revolve KC and 816 to get parts for Karin’s new bike build.

Tara, Timber, Dirty Nancy, Brad, and I met up at Velo Garage somewhere around 12:30 pm.  We had a couple beers, and went out for a good 25 mile route with some decent hills to climb.   We headed back south across the river, then up Beardsley road and down to Southwest Boulivard.   We road the length of the Blvd in order to get down to the Shawnee Heights neighborhood were we got stuck behind, not one, but TWO trains.   The first was mid crossing right when we go there, we waited for it, had the gates go up, and started to get our bikes moving, when the gates started coming down again.   Maybe 1 or 2 cars both ways made it through.  Well except for that one idiot who ran the crossing after the gates were down.  We were forced to sit and wait out the second train.  Luckily that train had a decent pace going.

Pulling up to the crossing was also right when my rear tire punctured!   I run tubeless, and Timber and Tara were riding behind me, so they both got a face full of white goo as the wheel spun around.  Just another weekend for them I guess.   Oh wait, this time it was sealant.   My little racoon mascot got soaked as well.  He’ll need a good cleaning.   Luckily the tire sealed itself up after 2 rotations or so.   Once we got through the crossing, the sealant failed for another rotation or two, but then the tire sealed up again and pretty much held for the rest of the ride.

From there we ended up climbed that great hill up to Sauer Castle, cruised the rollers up on Shawnee Rd, and then headed back down towards Southwest Boulivard where that new Carvana tower is and…  GOT STUCK BEHIND ANOTHER TRAIN!  Ugh..  I’m beginning to feel like I’m bad luck when it comes to train crossings.

After the crossing we headed up the climb on Roanoke Rd, up through Roanoke Park, and eventually  across town on Linwood over to Gilham, and made our way down to Brewery Emperial, our mid ride beer stop.  There were pretzels, maybe some sausage (Dirty Nancy ordered that, of course), and some good ales.   We refreshed, we crossed over to the Paseo, hit Cliff Drive, the Goose Neck, and then  descended down into the eat bottoms.  Nancy and Brad left us as we got into the Columbus Park / Rivermarket area to go hit up an Oktoberfest Celebration and later dance the night away.  Timber also took off there to go meet up with Bryn on a secret mystery date he had planned for that evening.   Tara and I crossed back over to Velo, my tire starting to get pretty damn low, to finish out the ride with a couple of beers before we called it a day.   It was a good ride: 25 miles with about 1200 feet of climb. 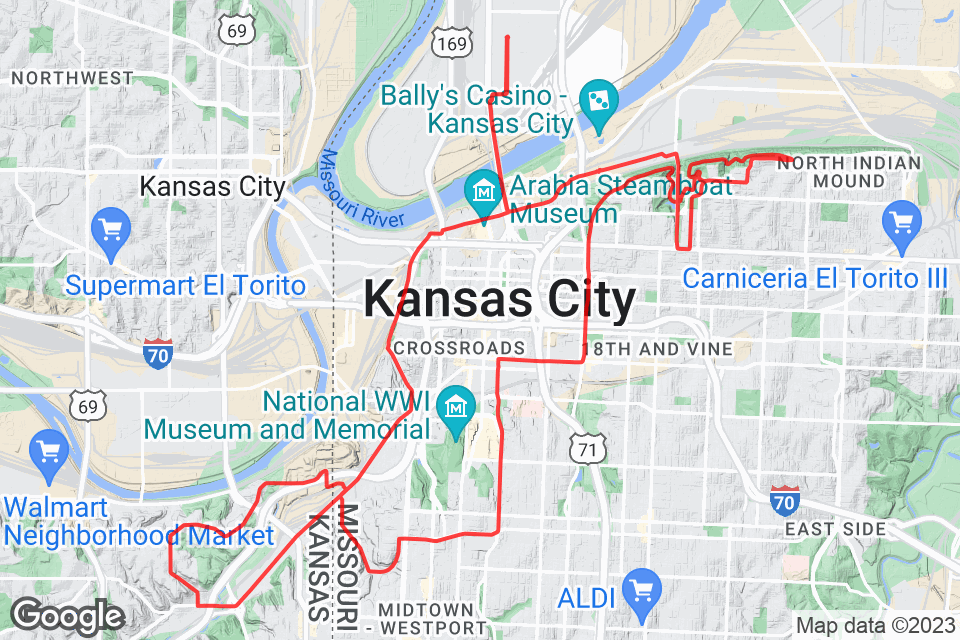 I of coarse went home, tried to find the puncture, couldn’t, aired the tire back up to my preferred pressure, and figured it’d be good to go for the next day.

Well, I woke up rearing to go, cause it was a GRAVEL Day!  More importantly, it was a ride that I didn’t have to organize!  I was just going to be along for the fun on this one, as Karin took the lead in “almost” organizing :).  I got up to take my dog out and was so happy, as I was walking by the front door, to notice that my rear tire was now flat!  Ugh..  I guess the sealant didn’t fully seal the tire up after all.  I could have spent the time trying to find the leak, patch it, and get it all back and ready to go before our 9:00 am meet time, but I decided I didn’t want to waste the time, and I had an extra tire ready to go.  So, after feeding Mouse, I pulled a quick tire change.  I got geared up, and got all the way down to Olathe pretty much on time.  Ok, Maybe I was a few minutes late.

We met up a fun restaurant called Foody’s.  As I entered a kind gentleman host approached me.  I saw the table with our crew and told the gentleman I was going to join them.  He immediately asked, “Would you like to start off with what they are starting off with?”  I asked, “What are they starting off with?”

He smiled and said it’d be right out and I went over to join the crew.  It was a damn fine Bailey’s and Coffee too.

So who was the Crew?  Tara, Karin, and Treadwell Jones were already there.  Neal joined us shortly there after, after having to make a turn around on the way down to go get his forgotten helmet, and the 5 of us  had a great breakfast.  Nancy and Brad showed up as we were finishing our breakfast, and then Captain America, Steve Rodgers said, “To Hell with all the damn house work!” and showed up to have a little fun in the rocks.  Finally, to complete the crew, Lynne showed up right around 10:00 am for our little morning fun ride.

Sometime after 10:00 we finally hit the road and headed south towards Gravel!  We road through a couple miles of pavement in what was probably one of the best peloton line’s we’ve ever had, Karin pulled most of it and we were  averaging close to 15 mph into the wind.  Nicely done Karin.   We then hit our first bit of gravel which was, honestly, kind of a rough.  Try to ride outside of the wheel ruts, and you’re in for a bad time.   The rough spot only lasted about a mile though, then we took our first stop and took time to adjust our layers for the day.  It definitely was a bit chilly, but once we got moving, full finger gloves, outer jackets, these things needed to come off.

After that we got on to some pretty firmly packed gravel/dirt.   Again, despite the head wind, we were keeping a decent pace, averaging around 13.5 mph.  There were several other groups out on the gravel as well.  One of which recognized those in our crew that road Lap the Lakes as “The fireball shots guys.”   Team Bad Decisions infamy grows.

We continued our ride south until we got to Hwy 68, and road along the tight shoulder there for a couple miles in order to get to the Louisburg Cider Mill.  I had heard of this place before, but had no idea how larger this place was.  Specially for their Fall, pumpkin patch setup.   Pumpkin Patch, Corn Maze, Food Trucks, Stage, Cider, Homemade Donuts, and a GIGANTIC inflatable bouncy pillow.  I’d say bounce house, but there were no walls.   Just a giant pillow that had to be 5-6feet tall that they were letting kids jump on.   I was honestly surprised not to see kids getting bounced off the thing.   Anyway, the place was packed, and traffic on the highway trying to get into the place was so backed up, that they had Sheriff’s patrol there helping to direct and get cars into and out of the parking lot.  We wound our way through all the instragram models there for their “Fall Country Weekend” posts to get some Cider and some donuts.  It’s completely possible that a flask of fireball made its way around the group enhancing the cider some.

We then caught up with Timber and Bryn who drove down to meet up with us and also get their Halloween pumpkins and their own instagram photos at the Cider Mill.   Then, Jeff W. arrived down at the Mill with Addie in tow and a cooler full of beverages.  Sodas.  With Koozies to ensure we weren’t promoting any particular brand of Soda.  That’s our story.  Soda.  Team Bad Decisions will except sponsorship, but none of these sodas were from sponsored brands.  So, we covered them so as to not influence the young ones who saw us and obviously thought we were awesome for biking down there.

After our sodas, Lynne said her farewells in order to ride back with Jeff and Addie as they had get Addie back north to hand-off with Addie’s mother.  Thusly, Lynne had to sadly miss the part of the ride where we finally had the wind to our back and were able to KICK IT!

Before we took off from the Mill though, the Timmie’s recommended a winery that was only a couple miles away, and the turn off was on our route back.   After doing some quick math to ensure we could make it back to our cars before we lost daylight, we gladly agreed to the plan.   So we headed a bit further south to Somerset Ridge Vineyard and Winery.   A quaint little winery out in the middle of God’s country that had some decent musicians playing an acoustic set, several awesome dogs running about, and gave us an opportunity to try an amazing SANGRIA SLUSHY!   Yeah…  Move over 7eleven.  Big Gulp this!

For the ride back, we decided to just take the reverse of the route we took getting out there.   This got the group off of Hwy 68 as quick as possible which was good because that shoulder was pretty tight.  Odd feeling when your on a 3 foot paved shoulder and a big rig pulling a 53 foot trailer passes you.   The ride back was tons of fun.   Here’s a few highlights.

We wound our way back to Foody’s, found our cars, and completed a fun 45 mile ride with close to 2000 ft of climb. Nancy and Brad said farewell and then Karin, Treadwell, Tara, Neal, Steve, and I headed to the nearby Peanut bar for a few post ride drinks and appetizers.  Honestly it was a great day’s ride.  Karin said it wasn’t really organized, but I don’t know what more organizing could have done.  We had a basic route to work with, a meeting location and departure time, and enough flexibility to let our group be ourselves, which seems essential for Team Bad Decisions. 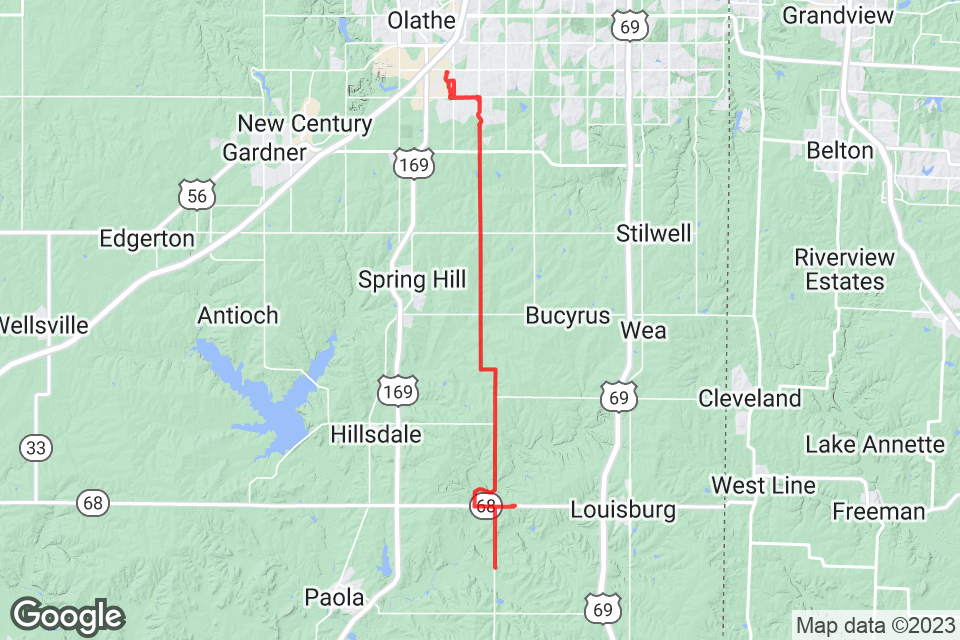 Post ride thought?   It doesn’t matter if its fall you pale bastard.  Put some sunblock on your face you moron.

Here’s some Pics from the weekend.