I took a bit of a nap last week, and ended up not writing up about our cycling adventures, so now I’ve got 2 weeks worth or rides to report on.   Let’s see what I can remember!

While meeting up for a Royals vs. Cardinals baseball game, it was decided that Megan, Jeff, and I needed to really kick it in gear and get some good training rides in prior to our Bourbon Country Burn ride in late September.   So we agreed that it’d probably be a good idea to sign up to ride the Summer Breeze ride and get 30+ miles in.   So we did!

Megan, Jeff, Craig Miller, and I also met up with Chris Bobal, the husband of a member or my book club, on a cloudy drizzly Sunday morning.  Chris had been riding regularly for several years, but never anything much more than 20 miles.  This was going to be his longest ride ever and he was a bit worried.  He had no reason to be.  Chris was more than ready.  We’d been watching the weather all weekend, and it didn’t look great, but it looked like there was a chance we could get the ride in, so we hit the road!   The 36 mile route we signed up for was very similar to the 50+ mile route that we took the year before.  It looped around Long View Lake, took us south into Raymore, to our first stop.   Things were going well on this leg of the trip, right up until mile 12.   Then the drizzling started.   Luckily for me, mother nature called at about this same time, and Chris Bobal and I pulled over at a CVS so that I could use their restroom.   We tried to wave down Megan, Jeff, and Craig as they road past, but were unsuccessful.  They road on.  It seems that while I was using the facilities, the wave of rain really came through, and dumped a good amount of water on the ride.  I, for the most part, missed it.   Ahhh Shucks!  Chris and I got back on our bikes and began trying to catch up.   We finally caught up at the Raymore Recreational Park (our first stop) and found a drenched Megan, Jeff, and Craig waiting.  Chris and I were a little wet, mostly just our shoes and socks as water splashed up through our cleats.

While at the stop, we pulled up the weather map and took a look at what was coming.   There was a good wall of rain on its way in.  Estimating its arrival, and our current pace, it looked like if we went the full 36 mile route, we’d be smack dab in the middle of the rain, however, if we cut it short and took the 27 mile route (the routes diverted right at this stop) we might be able to make it back to the beginning before the heavy rain got to us.  We made the call and took the shorter route.  Smiles before miles!

So we took off again, and I told Chris that since we were going a shorter route, I really wanted to pick the pace up to the end so that I got some sort of workout it.  Christ agreed and said he’d do his best to keep up, but not to worry if he fell behind.   So we kicked it up!  For pretty much the final 8 miles I was going at the hardest pace I could go for that distance.  Chris, well he was able to keep up, and was right there with me the whole time.  Like I said, he could ride.  Once we got back to the start area, on a whim, I decided to start a stop watch to see how far ahead we had gotten from the rest of the group.   I guessed we’d have about 10 minutes on the, and I was right.  A little after 10 minutes later, Jeff, Megan, and Craig pulled in.   There, we sat under a dry tent as the rain started to come in.  We had some pizza and salad, and enjoyed a couple rounds of beer, as we are known to do after a ride.  A good ride. 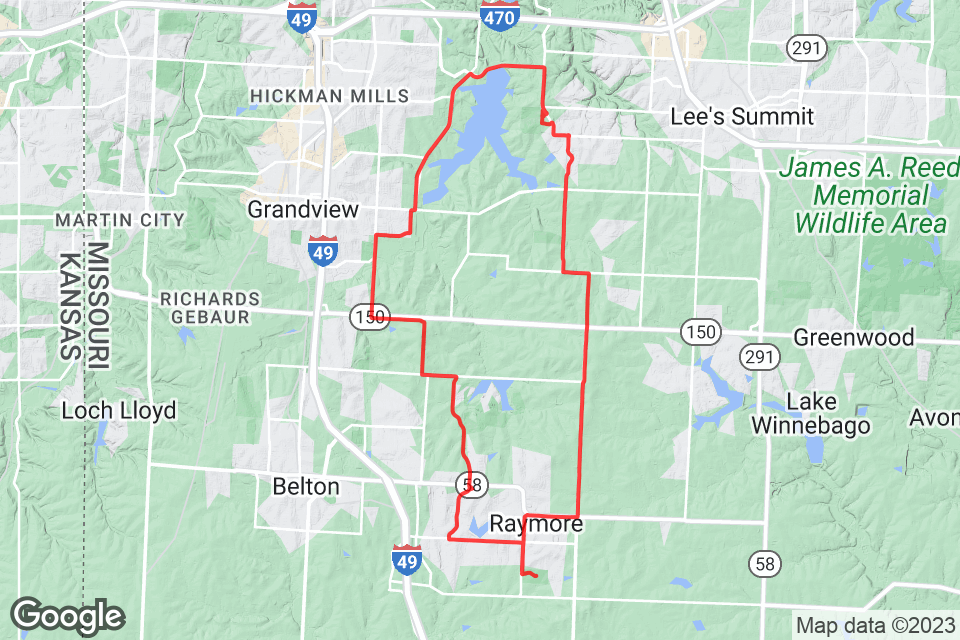 This time Megan, Jeff, Craig, and I met up on a gorgeous Labor Day morning.  We gathered at Opera House Coffee in the River Market, where we spent a good 30-45 minutes drinking coffee and, as Megan would describe it, chit chatting.  From there we headed east over to cliff drive.  I wanted to go for a PR up the connector trail climb, but was unaware of where the segment actually started.  At the base of the connector, I stopped to make sure the group knew where the turn was.  little did I know the clock was running.  Grah!  So I didn’t get that PR, but I did get several others on the day.  We road what used to be a pretty typical Velo Thirsty Thursday ride route before the sink hole opened up in the East Bottoms.   We road it anyway and found a way to navigate around the construction.   Up on cliff drive, it was shady, cool, and a nice ride.  We then turned up Gladstone, and spent a little time checking out the Kansas City Museum and the Amazing houses to the north of it.  After that, we bombed down Chestnut down into the East Bottoms, where Megan had the brilliant idea to go see if the Rieger Distillery was open.  IT WAS!  So we stopped in to check out there amazing space, and since we were training for the Bourbon Country Burn, we might as well have a whiskey drink while we were there, right?

After our drink, and subsequent slide down the AMAZING TWISTY SLIDE at the Rieger, we headed back up to the River Market and then North across the HOA bridge, through NKC, and then over and up the Line Creek Trail.   We rested a bit up at Barry Rd, then made the return trip back the same way.  Then we stopped at Strange Day’s Brewery in the River Market for a post ride drink….  Just in time for the Monday Strange Days Ride!   Megan, Jeff, and Craig called it quits after the 32 that we’d put in, but I stuck around.  Lynne, Jeff W., Nancy, Derek R., Tara, Robert, Neal and Emily from the Ragbrai team, along with several others who we commonly see out all showed up for a pre-ride drink, and then we went out on a little 14 mile route through KCK.  We went through a cool historic area with ties to the Underground Railroad, and then back through an unexpected gravel route along the railroad tracks, as our crossing was blocked by a train that wasn’t going anywhere fast.

I finished the day with a couple more beers at Strange Days, and 46 miles in the books. 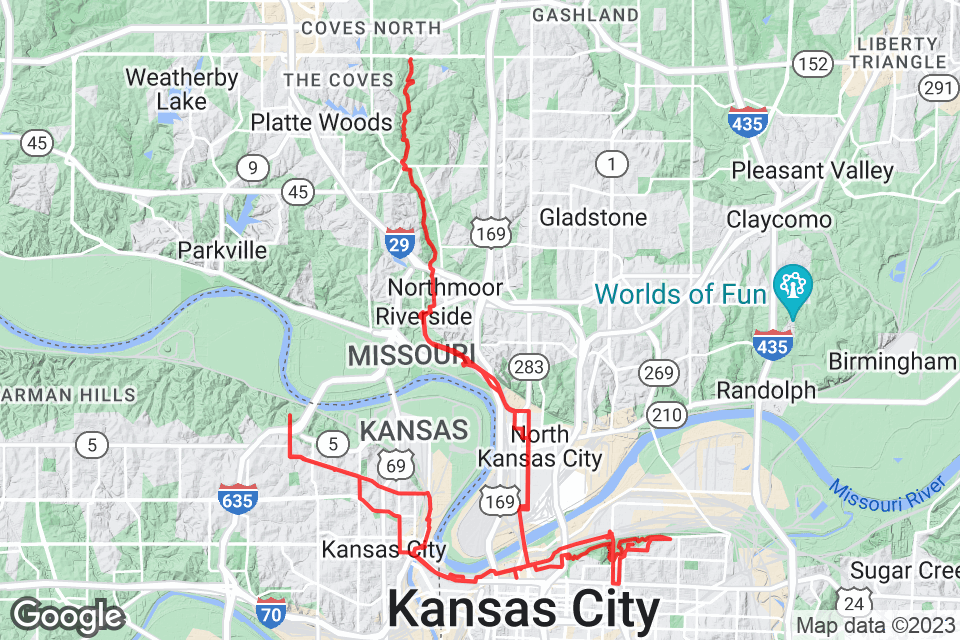 Team Bad Decisions is riding the 35 mile route.  Come join this Saturday for a fun ride with some good BBQ.   Checkout the above link for details about the ride and registering.   The 35 mile route stages at 8:00 am and departs at 8:30.  If you’re not going to get to one of the pre ride packet pickups, be sure to get there a bit earlier to pick up your packet.