This past Saturday was our monthly BBBR ride, and several were able to get out and join us at some point along the day (despite our late start).  Our morning group finally hit the road somewhere in between 10-10:30.  You know… coffee, food, messing with water bottle cages, these things take time.  Ultimately, Tara, Robert, Neal, Derek R., Timber, and I finally hit the road.  I wanted to make sure it was a good training route, so I aimed for a route that was decently hilly.  We went up to Cliff Drive, via the connector, then road up the Goose Neck, then we crossed the river on Chouteau, hit Parvin, and took that West until we got to Briarcliff.  Parvin’s got some decent rolling hills and turns into Briarcliff Parkway, which also has some great rolling hills.  We crossed the river again down by Argosy’s, rolled through KCK, saw a cool little Car Show that we causally rolled through, then up through the west bottoms and on to Strange Days brewing in the River market.  There Timber had to bail on us, but we pickeup up Lynne, Jeff W., and Addie; along with Delvin, a friend from the Velo Garage rides that just happened to also be at Strange Days.

After a couple refreshing beers, we hit the road and headed out for a south loop.   We road over to the Paseo, then down through Hyde Park and then into Brookside, where we hit up BKS artisan ales.  They’ve got some tasty brews.  Check them out.  Then we rolled south to KC Bier Co where we had a little food and some more bevs.  Saddly I had an evening event to get to (which was also at KC Bier Co) so I had to ride from their directy back downtown and ended my ride, but the rest of the crew continued on as they should.  After fixing a flat, it looks like the crew road on the Brewery Emperial for some more bevs before calling it a day.  Ride. Drink.   Ride some more, and Drink.   This is how you get ready for Ragbrai!

Here’s my route, which probably isn’t too different than the others routes on the south loop. 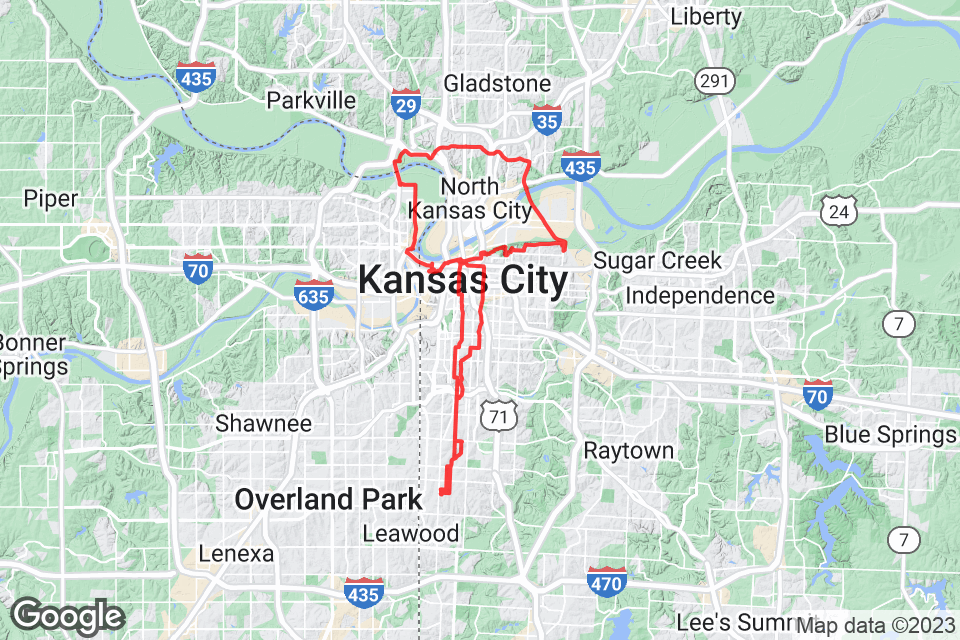 Despite the warmth, it was a good day of riding.   See Pics Below

Details can be found in the link above.  If you’ve not registered for this ride yet, NOW is the time to do it.  Look forward to seeing you out Saturday Morning.

Details in the link.  No registration needed.  Just grab your bikes, your lights, and lets get out and ride.  Road this last year and it was a good time.  Join us!

A terrific event that you should go register for NOW!  Current plans are to go down, ride, and then camp that night down in Emporia and come back on Sunday.  Get your Gravel Ready Bike setup and come join us.