How’d your weekend go?  Did you get a chance to spin your pedals?  Maybe wear down the rubber of your tires on some pavement?  Lynne, Jeff W., and I were able to find a little time yesterday to do a little riding.

We had a nice lazy morning start.  What was originally supposed to begin around somewhere between 10-11am, didn’t actually get rolling until closer to noon.  The nice thing is that instead of ending the ride with a beer at Bier Station, we started our ride with a beer at Bier Station.  Once we got out on the road, we headed east towards Swope Park.  There we were able to check out a couple of the art pieces that are on display as part of the Open Spaces exhibit.  The weather was gorgeous, and we got to check out a part of Swope park that I’d never been through before.  Now…  There was quite an unexpected hill that we had to climb to get to that part of the park, but it was the type of hill that really makes you feel like you accomplished something when you get to the top.  Per strava, part of the climb was over a 16% grade.   That’s a good climb.  AND…  We got to ride back down too, so that made it fun.

From there we road North out of Swope park on a new segment that will at some point become a part of the Blue River Trail.  Right now the segment begins just north of Swope Park near the Children’s Mercy Soccer Fields, and ends as it connects to the Brush Creek Trail east of the plaza.  This is the trial that Scott, Bryn, and I road on our 4th of July ride.  In the future it’ll be amazing.  Right now, it’s not very well maintained and there are twigs and obstacles to watch out for, but still, it’s a cool path and a good ride.  We ended up in the Plaza and stopped at Sahara Mediterranean food on 51 st. for some lunch before we called it a day.   Here’s our route if your interested. 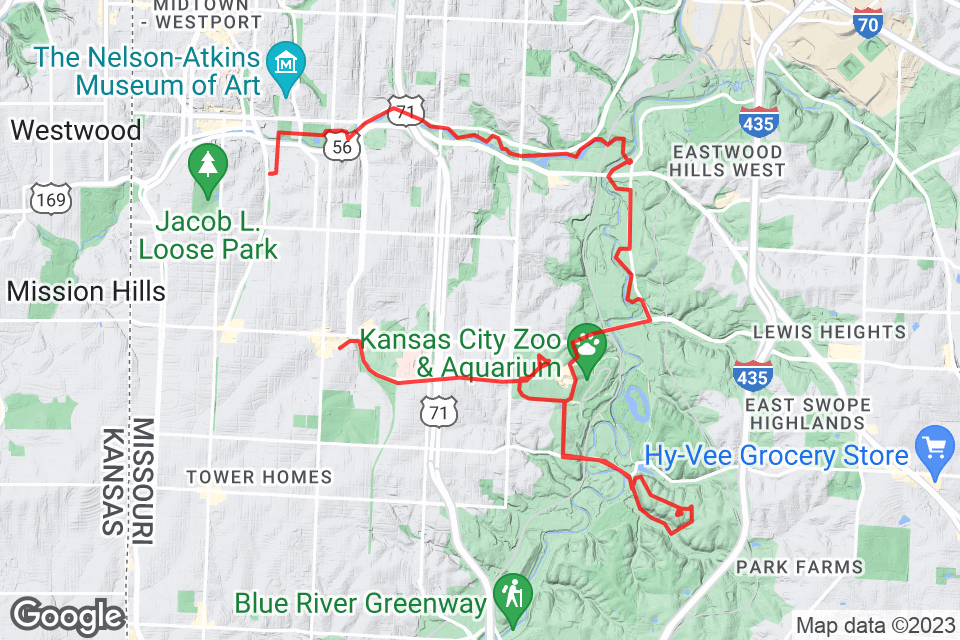 That new trail would have been part of the route for the Gran Brewdo…  Speaking of which.

So, no longer a day filled with all day beer drinking and cycling, and no BBQ that evening.  Instead I’ll organize a regular BBBR this Saturday morning for anybody that wants to get out for a ride.

Remember to sign up for this one.  Looking at the Mid range distance.  Always a good ride.  Don’t forget to checkout Megan’s comment about how to get a discounted entry fee if you haven’t signed up yet.