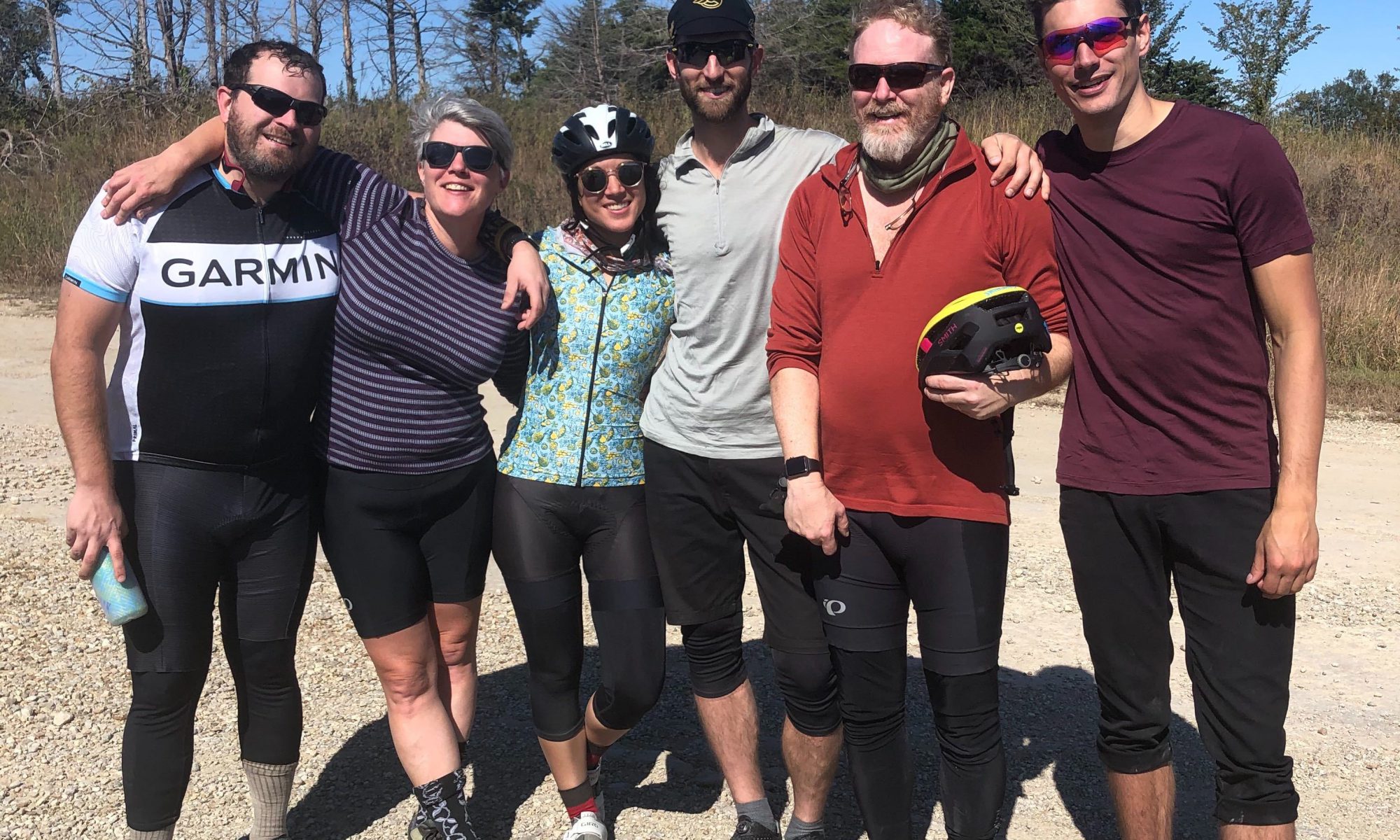 When you’re yearning to ride some sweet Kansas gravel, where else to go than Emporia, Kansas? Thanks to the Jones Brain Trust (mostly Karin), we made tentative plans a few months ago to ride in the Lap the Lakes Gravel Grinder race in mid-October. Somewhat uncharacteristically, I registered before the deadline, committing myself to the joy and, possibly, suffering that comes with riding 100km (appr. 62 miles) of gravel. Also registered? Karin, Treadwell, Derek, Neal and Jeff W.

Jeff and I arrived early Friday evening to the Airbnb Karin had reserved for the weekend and the entire group enjoyed a lovely family dinner of Karin’s famous spaghetti gravy and meatballs, salad, garlic bread and…three bottles of wine. After some last minute bicycle futzing and layer strategizing, we went to bed early enough to get a solid 7 hours of sleep. Good Decisions: 1 | Bad Decisions: 0

6 a.m. came very, very quickly. Fortunately for anyone who neglected to set an alarm, there was a train rolling through town just a few blocks away, blasting its horn exactly the way a train should when passing through town. Also good:  Jeff scheduled the coffee maker to start brewing at 6 so we had hot, fresh coffee waiting when everyone got up! After a delicious eggs/bacon/oatmeal/fresh fruit breakfast, everyone layered, loaded up their gear, and headed out to ride. It was a beautifully crisp 30 degrees out.

We rode the short distance to the start of the race on Commercial St. in front of Mulready’s and Gravel City Adventure, where most race participants were already gathered. After a brief safety and information announcement from the race organizer and a nip from the steel banana, we followed the Emporia PD escort a short distance out of town to the main event: gravel. It was still very cold. I kept removing my gloves to mess with a borrowed Garmin 830 only to later realize that my gloves are touchscreen compatible and I didn’t need to remove them at all. Good Decisions: 1 | Bad Decisions: 1

The first ten or so miles were glorious. The chilly, sunshine-y fall morning was refreshing af compared to the oppressive heat and humidity of summer. Everyone had the appropriate layers to be comfortable and not overly warm or sweaty while moving. Around mile 12 or 13, we stopped for a beer and some pulls of whiskey, which I’m told is a very normal 9 a.m. activity. While we were stopped, the race organizer, who is also a member of the Emporia PD, drove past us in the SAG vehicle. We may or may not have offered him beer and whiskey. Good Decisions: 1 | Bad Decisions: 2

I was getting cold standing around so I rode ahead. The next segment of the ride was beautiful — plenty of Konza Prairie vistas and undulating terrain. As I approached Lake Kahola, I saw signs for the the KOM/QOM challenge and shortly thereafter a couple 200km riders blew past me like I was standing still. One of them was on a single speed. Jeff caught up to me at the top of the hill and we rode down to the checkpoint together. For those who did Lunar Kanza this year – the KOM/QOM challenge was the reverse of the one for Lunar…we came at the hill from the opposite direction.

Checkpoint 1 was a great opportunity to drink some water (and beer) and have a snack. We probably overstayed our welcome, but the volunteer did tell us we were the most entertaining group she’d encountered, so. Good Decisions: 1 | Bad Decisions: 3

We moved on after a refuel and some shenanigans. At this point, we were absolutely the very last 100km riders and 100% okay with it. The weather was ideal and only getting warmer. We shed layers as we rode, stopping periodically to remove arm warmers, jackets, buffs and gloves that had been essential in the morning but were becoming bothersome under the cloudless, radiant sky. At one de-layering/beer stop, Neal noticed that his rear tire was low and paused to deal with it while the rest of us admired the landscape and took pulls of whiskey. A few minutes later, Neal realized the temporary fix would not hold for the next 35 miles, so we took a little gravel sabbatical that included snacks, hydration and documenting the experience. There was Fireball and beef jerky. We came to the conclusion that the 5 Second Rule definitely applies to rural gravel/dirt roads in Kansas. Good Decisions: 1 | Bad Decisions: 4 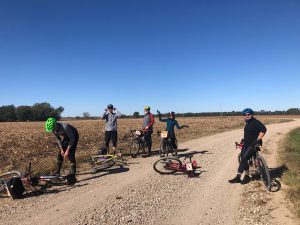 A short while after our sabbatical, we arrived at checkpoint 2, where the lovely volunteers were similarly amused by our approach to what was supposed to be a race. Having finished far too much whiskey and far too many beers, we took our time at this point to eat a proper meal of sandwiches, dried mango and pretty much anything else we had with us. Refueling was good and necessary; we still had about 20 miles to ride. Added challenge: the next 20 miles were into a strong (19 mph) and gusting (up to 30 mph) head and cross wind. 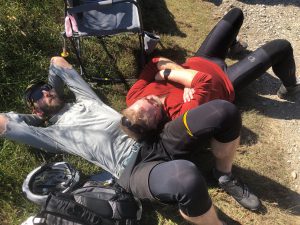 I really hate strong winds. That’s not to say it wasn’t fun – it was just Type II fun. The kind of fun I can enjoy and relish now that it’s over and I conquered it and didn’t quit. Oh, there was also a small water crossing, which was an unexpected surprise. You can watch Karen’s version here (language very NSFW, but highly recommend watching with the sound on):

The last 20 miles were definitely the hardest mentally. We were fighting the wind the entire time and everyone was pretty tired. For four of the six of us, it was our longest gravel ride to date. All of my gratitude to Karin for repeatedly telling me I was fine and that we were actually going to make it back to Emporia. We did, eventually, and it felt great. Even going up the hill at the end (very slowly) that apparently every ride from Emporia includes felt great. When we crossed the finish line (there was a real finish line!!), the race organizer confirmed that we were the last of the 100km riders to finish. We didn’t win the race, but we certainly won the party. Good Decisions: 2 | Bad Decisions: 4

Post-ride, we headed to Gravel City Adventure (duh). The kind gentleman manning the shop offered us beer, which we graciously accepted. Much, much later, Neal’s bed broke and my back tire developed a flat.  Overall, a great weekend and 70 miles of gravel done and dusted.